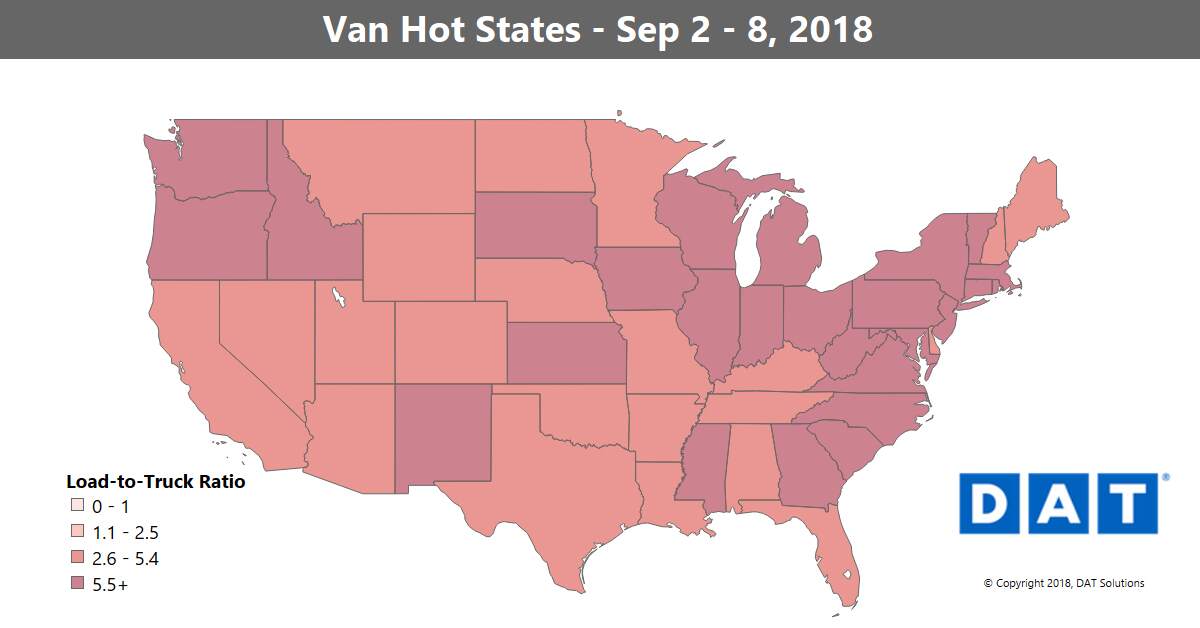 When disaster strikes, trucks are needed to get emergency supplies where they're needed most. But as has been the case with Hurricane Florence – which is anticipated to make landfall on the mid-Atlantic coast later this week – we're seeing how trucks are a big part of the preparation process before the storm, too.

1. Before the storm, there's urgency to move freight into the area or out of the way of the storm's path. We saw that last week and early this week. Load board activity on DAT Load Boards last week wasn't down nearly as much as you'd expect when accounting for Labor Day. Part of that was FEMA loads adding to demand on the spot market.

2. When the hurricane hits, there won't be much going in or out until the storm passes, so volumes decline in the storm zone. FEMA and other emergency responders will move freight to temporary warehouses just outside the storm zone, waiting until road conditions are stable. Some of those loads are already being tendered to freight brokers and 3PLs, who post them on DAT load boards. Many of the destinations are in inland North Carolina markets, including Charlotte, and those lane rates are rising now.

3. After the storm passes, we'll see more emergency freight brought in, which usually brings a temporary increase to inbound rates. There likely won't be much freight moving out of the areas hit by the storm, so truckers will probably have to deadhead out. Van and reefer loads usually move in first, and flatbed demand picks up later if there's construction equipment needed for rebuilding and cleanup.

Rising pricesUrgency to get freight from the Northeast into Charlotte ahead of the storm pushed rates higher:

The two biggest increases were on lanes out of Denver, where outbound rates are typically low: